What is Locality Planning?

For information on the Review of Locality Planning in Glasgow click here.

The Glasgow Community Planning Partnership (GCPP) is required to carry out locality planning in all neighbourhoods that are deprived compared to the rest of the city. Currently, GCPP is carrying out this work in the 10 neighbourhoods covered by the Thriving Places programme. 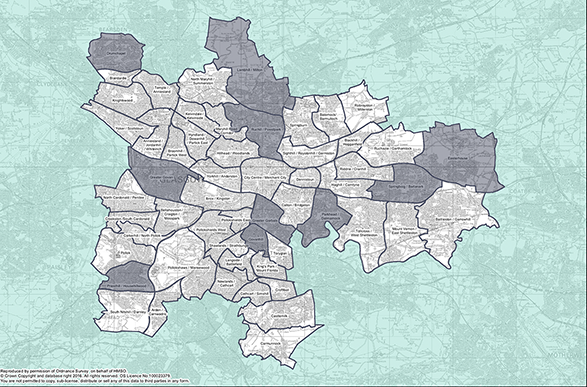 Each of these 10 neighbourhoods has a locality plan, which must set out outcomes for a 10-year period.

GCPP need to provide feedback to communities on what progress is being made through locality planning. Updates for each of the 10 projects can be found on the relevant locality page on this website. An update on locality planning across the city as a whole can be seen below.

What is the Thriving Places Programme?

Thriving Places is about bringing people together to help improve the quality of life in the 10 neighbourhoods covered by the programme. The programme currently funds a Community Connector in each of the 10 neighbourhoods to bring local community groups, services and organisations together to address local priorities. Community Connectors are employed by an organisation that already works within the local area and has good links with local people.

The Community Connector is not the only person helping community development in these neighbourhoods. There are also community workers in Glasgow Life, Further Education Colleges and many Housing Associations, for example.

A steering group of local people from local community groups, organisations and services comes together as often as necessary to make sure that Thriving Places is on track to meeting the needs of local people as set out in the plans. This group helps the Community Connector to work with the right people at the right time using the right methods.

GCPP is required to show how outcomes have been improved within localities. Key information is presented below on how inequalities and participation in decision making have changed.

It is important to emphasise that locality planning is just one way to affect change in local areas. There are a number of factors which may impact upon neighbourhood change, most notably physical regeneration.

*NHS Adult Health and Wellbeing Survey data is from 2013 and 2017, SIMD data is from 2012 and 2016.
**It should be noted that the NHS Adult Health and Wellbeing Survey is currently carried out in 4 of the 10 localities. This figure therefore does not represent the whole population covered by the Thriving Places programme. Work is underway to ask housing associations to include a module of questions within Tenant Satisfaction Surveys that will provide data for other neighbourhoods.

The positive proportion of mental or emotional wellbeing in the 4 localities surveyed in 2017 had increased by 2% since 2013. There was still an 8% deficit with the rest of Glasgow, although this deficit has reduced from 11% in 2014/15. This means that mental and emotional wellbeing the 4 localities is improving and inequalities with the rest of the city is lessening.

Between 2012 and 2016, the proportion of residents living in the worst 20% data zones increased by 2% across the 10 localities. The gap between the 10 localities and the rest of the city has also widened. A person living in one of the 10 localities is more than twice as likely to live in disadvantaged circumstances than if they lived elsewhere in the city. However, it should be noted that there are other significantly deprived neighbourhoods not covered by the Thriving Places programme.

The NHS Adult Health and Wellbeing Survey includes a question on participation in decision making. Data is available for the 4 localities covered. This is shown in the table below.

There is a different look and feel to community involvement across the 10 localities currently covered by the Thriving Places programme.

A number of community groups are directly involved in decision making structures in Govan, Priesthill and Househillwood, Ruchill and Possilpark. In Drumchapel, communities are brought together to take action on specific issues that have been identified by local people. In the Gorbals, local people are regularly consulted on local priorities.

In Lambhill and Milton and Springboig and Barlanark, Scottish Community Development Centre (SCDC) is providing additional support with community involvement through the Supporting Communities programme. Work is underway in Govanhill to set up a number of forums that will enable local communities to engage in decision making.

In Parkhead, Dalmarnock and Camlachie, local people were recently consulted to identify local priorities. In Easterhouse, community participation has been identified as a priority and work is underway to support the active involvement of local people.

In 2018/2019, Glasgow City Council carried out a 10 month long review of locality planning in Glasgow. This review makes a number of recommendations to improve the co-ordination, funding and governance of the Thriving Places programme. The review also considers how to roll out locality planning to other neighbourhoods beyond the Thriving Places programme. The final report is available here:

How You Can Get Involved